The fifteenth century marks a very important chapter in the history of the entire human race. On one hand, where the western world was witnessing the renowned Renaissance period, the Eastern world was about to witness a revolution of a different kind.

The consciousness of the people, being gravely afflicted by the age of quarrel, had stooped down to the lowest levels of religiosity. Deluded by the mere objective of sense gratification, the pure knowledge of the Vedas had not only become diluted but had started to be misinterpreted by the non religious. The spotless sky of Vedic culture seemed to be engulfed by the darkness of ignorance of the present age of Kali. At that time, on the Phalgun Purnima evening in the year 1407 Çakäbda (corresponding to February 18, 1486, by the Christian calendar), dissipating the darkness of ignorance, the moon of Sri Gaurasundar (Lord Chaitanya Mahaprabhu) rose. By His own sweet will, in order to protect His devotees, to vanquish the evil and to re establish the eternal dharma of the loving service unto the Supreme Personality of Godhead, Sri Krishna, Sri Vasudeva the son of Yashoda advented Himself as Sri Gauranga Mahaprabhu at Sridham Mayapur in the city of Navadwip, West Bengal. Navadwip, then was the centre of knowledge and culture and this brought the learned Brahmana from Sylhet by the name Sri Jagganath Mishra, the father of Sri Chaitanya Mahaprabhu to reside near the banks of the Ganges in Navadwip with his wife Srimati Sachi Devi, daughter of Srila Nilambara Chakravarti who was renowned as a great learned scholar of Navadwip. 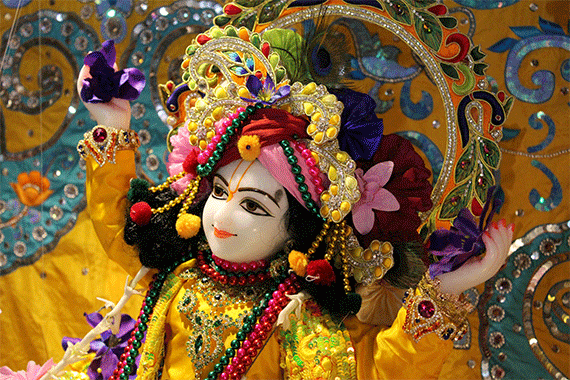 Sri Jagganath Mishra begot eight daughters from his wife but all of them died at an early age. It was Vishwarupa and Vishwambhar, two sons, who at last became the object of their parental love and affection. The tenth and the youngest child, Vishwambhar came to be later known as Nimai Pandita and after accepting the renounced order of life as Lord Sri Krishna Chaitanya Mahaprabhu. Lord Sri Chaitanya Mahaprabhu manifested his transcendental pastimes for forty eight years after which He decided to disappear from this material world in the year 1455 sakabda at Puri. Lord Chaitanya not only taught the principles of Srimad Bhagavatam but also the teachings of Srimad Bhagavad Gita in the most practical and self-exemplified manner. Lord Sri Chaitanya Mahaprabhu is the sameself Lord Sri Krishna Himself as the famous Vaishnava acharya, Srila Narratom Das Thakura, whose literary philosophical works are considered to be authentic doctrines of Vaishnava theology, sings

"Vrajendra-nandana jei, saci-suta hoilo sei,"
Lord Krishna, who is the son of the King of Vraja, became the son of Saci (Lord Caitanya)

This time however, the Supreme Lord has appeared in the most benevolent form to teach everyone the transcendental position of Lord Sri Krishna, the Primeval Lord and the cause of all causes. The essence of his preaching is that Sri Krishna, the son of the King of Vraja, Nanda Mahraj is the Supreme Personality of Godhead or Bhagavan and is therefore worship-able by all. The abode of the Lord, Vrindavan dham is non different from the Lord because in the platform of absolute knowledge, there is no difference between the Lord and the Lord's name, fame, form, qualities and abode where the Lord manifests. Therefore Vrindavan is equally worship-able as the Lord Himself. The transcendental damsels of Vraja exhibited the highest and the purest form of devotion unto the Supreme Lord by their unalloyed and unmotivated love for Sri Krishna and Lord Sri Chaitanya recommends this process as the highest form of worship. He preaches that the ultimate goal of human life is to attain Krishna prema or the spontaneous love of God.

Lord Chaitanya had instructed his disciples to write books on the science of Krishna, which the acharyas till date have been carrying out. As a result of the unbroken chain of disciplic succession, the elaborations and expositions on the teachings and philosophy taught by Sri Chaitanya Mahaprabhu are the most voluminous, exacting, authentic and consistent of any religious culture in the world. Although, Lord Chaitanya was renowned as a scholar, he only left eight verses which are called as Shikshaashtakam. These eight verses are complete and reveal his mission and precepts very profoundly.

Lord Chaitanya Mahaprabhu also taught that the Srimad Bhagavatam is the spotless narration of transcendental knowledge and the ultimate goal of human life is to develop the unalloyed, unmotivated love for the Supreme Personality of Godhead, Sri Krishna. 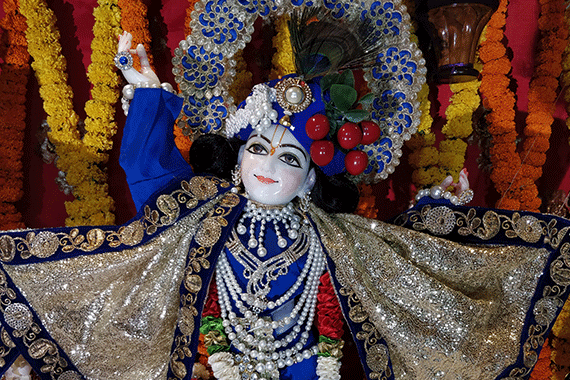 When the Lord, as a baby boy was on the lap of his mother, he used to stop crying at once when the ladies surrounding him used to chant the Holy names of Hari and clapped their hands. This beautiful pastimes was seen by the neighbours with great awe and veneration. Many a times, the young girls would take pleasure in making the Lord cry and then stopping him by chanting the Holy names. So from the very beginning the Lord started to preach the importance of the Holy names and make everyone chant the Holy names. In the early age, Lord Chaitanya was given the name Namai by his beloved mother, Sachi devi because the Lord had appeared underneath a Neem tree in the courtyard of his parental house.

When the Lord was only six months old, he displayed his future intentions to all. During his anna prasana ceremony, when he was offered coins on one side and Srimad Bhagavatam on the other, the Lord chose Srimad Bhagavatam instead of the coins indicating that he would be inundating the entire world with the love of God as described in the Srimad Bhagavatam.

Once when Lord Gaura was a mere baby crawling in the yard, a snake appeared before Him and he began to play with it. All the family members were taken aback and completely horrified by this scene but later the snake went away and Mother Sachi took her darling child away.

In another wonderful pastime, the Lord was once stolen away by thieves who desired to steal his ornaments but the Lord happened to enjoy a pleasure ride on the shoulder of the bewildered thieves who wanted to take him to an isolated place to rob him. But by the Lord's mystic potency, the thieves wandered hither and thither only to arrive before the house of Sri Jagganath Mishra where they became frightened and left the child and ran away of the fear of getting caught. The family was relieved to have the lost child back.

Once the merciful Lord, who is so benevolent to his devotees, happened to be visited by a pilgrim Brahmana. He was warmly welcomed by Sri Jagganath Mishra. However, when he used to offer the prepared prasadam to the Personality of Godhead, little Nimai would come and eat away the cooked prasadam. It had to be rejected and the Brahmana had to prepare it freshly. Again when the Brahmana was about to offer it to the Lord, little Nimai again came and ate away the preparation. When it again happened the third time, the Lord was put to bed by his parents. At about 12 midnight when all the family members were asleep, the Brahmana offered his special cooked prasadam. Again the baby Lord came and tasted the offered prasadam. The Brahmana began to shout but since everyone was fast asleep, no one came. It was then that the most benevolent Gauranga, showed his real identity to the Brahmana as Krishna Himself. He however asked the Brahmana to keep this incident a secret and the Lord as the sweet baby returned back to the lap of the mother. 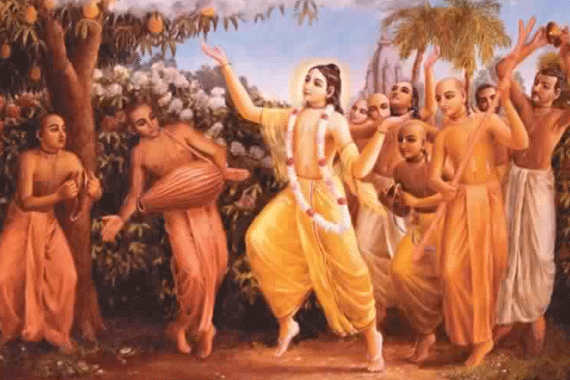 As a naughty boy, he used to tease the orthodox brahmanas who used to bath in the Ganga ghats. When the Brahmanas used to complaint about the Lord to his father that he used to splash water on them and didn't go to school, the Lord would suddenly appear before his father as if he were coming from school with all books and clothes. He also used to crack jokes on the neighbouring girls at the bathing ghats who used to worship Lord Shiva with the desire of getting good husbands. This is a common practice in many Hindu families performed by unmarried young girls. When they would be busy in their worship, the Lord would naughtily appear before them and say "My dear sisters, please give Me all the offerings you have just brought for Lord Çiva. Lord Çiva is My devotee, and Pärvaté is My maidservant. If you worship Me, then Lord Çiva and all the other demigods will be more satisfied." Some of them would not listen to the Lord and he would curse them that due to their denial they would get old husbands who would have seven children from their previous wives. Out of fear and sometimes out of love the girls would offer various goods to the Lord and the Lord would assure them that they would be blessed with young husbands and would be mothers of dozens of children. The blessings would enliven the girls but often they used to complain of these incidents to their mothers.